Mountaineers subdue Monarchs, 72-58, as Harcum hits a whopping 8 from beyond arc

This was the 15th time in program history that a player made at least eight triples. Harcum hit five during the second half, where the Mountaineers (11-10, 4-4 SBC) never trailed. He also pulled down a career-high seven rebounds and hit four of his five free throw attempts.

In terms of field goal percentage, App State ranks as the best defense in the Sun Belt (.399). The squad proved this in the first half when it held the Monarchs (11-9, 3-5 SBC) to seven field goals out of their 26 attempts. The Mountaineers held Old Dominion to only one field goal during a 12-minute stretch that included the last nine minutes of the first half.

Though the first half was marked by defense, Harcum hit his first three shots from 3-point range to put together a seven-point lead at the break, and the Mountaineers posted 12 points in the paint to Old Dominion’s two.

Harcum scored App State’s first eight points of the second half, setting the tone for the rest of the contest.

After the Butner, N.C. native hit his final field goal with three minutes left in the game, App State held on to a double-digit lead through the finish.

Justin Abson helped lead the visiting team’s feisty defensive effort, grabbing four rebounds and blocking two shots. The freshman’s block total is now at 43 as he inches toward the App State record books and ranks 16th in the nation.

After the win, the Black & Gold look forward to four straight games at home. App State will host Georgia State on Thursday night and Arkansas State on Saturday afternoon. Next week, the Mountaineers will host Marshall and James Madison. 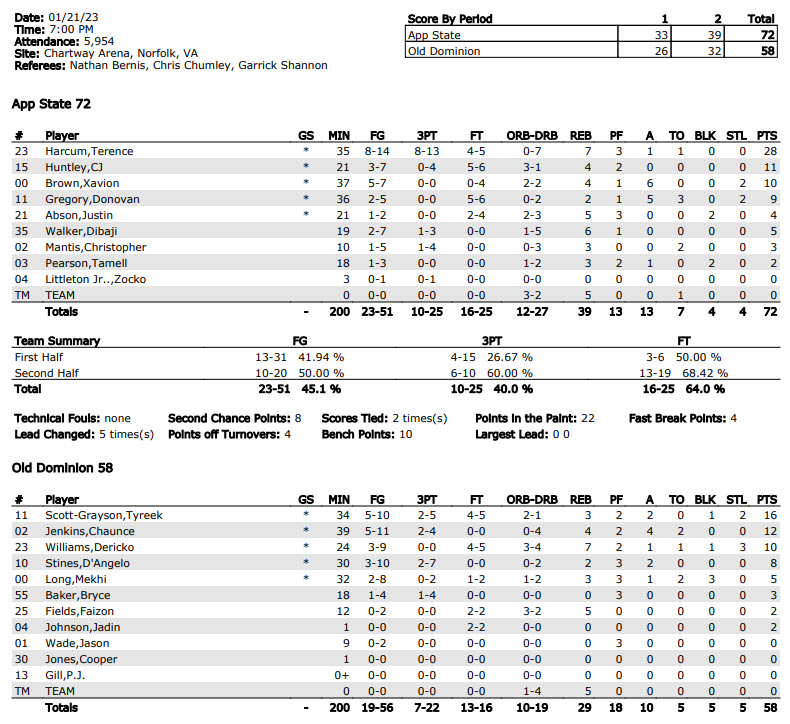